The record of Nazi brutality was transported to Nuremberg, where, from November 1945, the trial of the leading Nazis was being conducted. By then the document room at Nuremberg contained ‘over 5,000 collections, any of which might run into hundreds of papers.’ 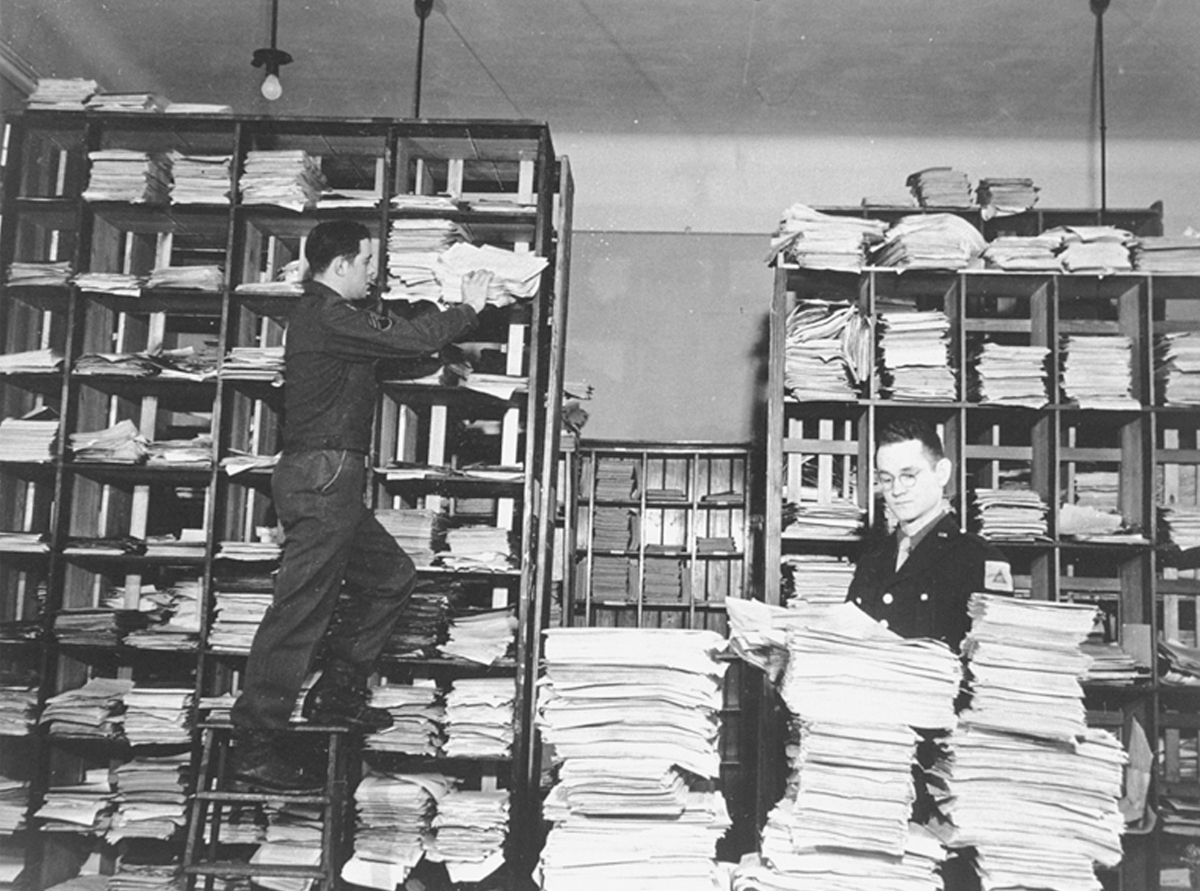 Holocaust Memorial Day is commemorated on the day Auschwitz-Birkenau concentration camp was liberated. In this post, English Cabaret reflect on how film and documentary evidence was assembled and transported to Nuremberg for the War Crimes Trials which were held 75 years ago this year.

Auschwitz Concentration Camp was liberated by the Russian Army on 27th January 1945. The forces filmed all they found at the location – the condition, the remnants, and the survivors.

As the allies made their way across Europe in the immediate aftermath of the Second World War, they added to this evidence of brutality piles of incriminating documents left intact by swiftly departing defeated Nazis, discovered, as David Maxwell Fyfe recalls in his autobiography, ‘sometimes in a castle, sometimes down a salt mine.’

In addition, they made reports on their findings, and took photographs. Altogether they comprised what Fyfe later called ‘an unscalable barrier of truth’ with which to confront those guilty of the crimes.

This record of brutality was transported to Nuremberg, where, from November 1945, the trial of the leading Nazis was being conducted. By then the document room at Nuremberg contained ‘over 5,000 collections, any of which might run into hundreds of papers.’

From the footage they had shot at Auschwitz, the Russians cut a 19 minute film which was shown to the Nuremberg prosecutors for the first time, almost a year after the liberation.

On seeing it, David Maxwell Fyfe, a principal British prosecutor wrote a letter home to his wife Sylvia  :

‘I went to a pre-view of the Russian film in Auschwitz concentration camp. When one sees children of Mo’s age and younger in this horrible place and the clothes of infants who were killed, it is worth a year of our lives to help to register for ever and with practical result the reasoned horror of humanity.’

Mo was their daughter Miranda who was then 7 years old.

On 27th February 1946 this film was introduced into the courtroom by the Soviet prosecutor, Colonel Smirnov:

‘Now we cannot yet name, or even number, many of the burial places where millions of innocent people were vilely murdered.  But on the damp walls of the gas chambers, in the places of the shootings, in the forts of death, on the stones and casemates of the prisons, we can still read brief messages of the doomed, full of agony, calling for retribution.  Let the living ones remember these voices of the victims of German fascist terror, who before dying appealed to the conscience of the world for justice and for retribution.

January 27th was selected as the date for national and international commemoration of the Holocaust, so that we may never forget.